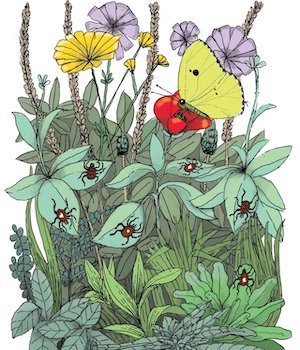 Now consider that those words represent a cluster of hundreds of pinpoint-tiny lone star ticks, all newly hatched, hungry for a meal, and hanging out on a leaf or blade of grass just waiting for some unsuspecting host—it could be you—to stroll by.

If you haven’t yet flung aside this story shrieking in horror, then meet Dr. Holly Gaff. An associate professor in the department of biological sciences at Old Dominion University and the field-lab director for the ODU tick research team, Gaff has spent a great deal of time doing what most of us would prefer to avoid: collecting ticks. In particular, a lot of lone star ticks.

Named for the whitish splotch found on the back of adult females (which supposedly reminded someone of a map of Texas), lone star ticks are very common throughout Virginia and the southeast, and their range appears to be spreading, according to recent research. They are typically found in wooded areas frequented by white tail deer, the ticks’ preferred host, where their three-year life cycle begins in late summer through early fall, when the ticks hatch.

“They will chase you down and take your lunch money.”

Sometimes referred to as seed ticks, “Lone star ticks as larvae come out as a mass,” says Gaff, and those masses that hatch together also feed together. And by “feed,” of course, we mean latch on to a host in hope of sucking some blood. Thus, to wander in the woods in late summer is to invite the prospect that, “You’ll look down and you’ll have 500 of your best friends crawling up your legs,” says Gaff.