In the land of bespoke grits: Virginia makes the food scene 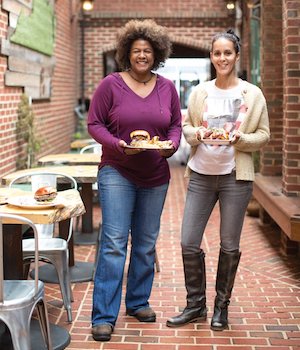 Perhaps you’ve noticed: It seems you can’t turn a corner in the Commonwealth these days without stumbling over a craft brewery, tripping against a small-batch coffee roastery, stubbing your toe on an artisanal cheesemaker, or staggering into a closet-sized restaurant featuring reinterpreted biscuits and gravy and a bearded chef in a trucker’s hat.

Virginia, a food movement is afoot in our state.

Where once reigned Sunday dinners of fried chicken, macaroni and cheese, and sweet tea, we find ourselves among brunch spreads of duck hash and trout roe and $12 cocktails crafted from microdistillery gin. In the land where once we simmered a green bean long past the point of surrender, we have freshly harvested vegetables you’ve never heard of artfully arranged against a bright gesture of saffron remoulade. Our grits are heirloom. Our pork is pastured. We do food trucks. We flock farmers’ markets. We Sriracha.

Across the state you’ll find an increasingly interwoven and expanding network of restaurants and specialty purveyors, festivals and events, small producers and diners all supporting a loosely defined, but collectively recognizable ethic that may be hard to name­—but you know it when you see it.

In tiny Meadowview in far southwest Virginia you can find local artisan goat cheese, sustainably harvested seafood, and “neo-Appalachian” cuisine at Harvest Table. In Staunton you can sit down to a prix-fixe three-course dinner, with venison sausage and braised rabbit served on mismatched crockery amidst communal tables at The Shack. And at FOODĒ in Fredericksburg, you can experience a Southern-rooted menu featuring locally sourced grass-fed beef, Virginia ciders and other seasonally rotating selections.

In Richmond last fall, you could have wandered from bison on stone-ground polenta to a five-course vegan tasting menu; from Rappahannock oysters to Surrey ham; from a “Battle for the Black Sea” dinner focused on Eastern European and Turkish cuisine to a Beaux Arts Ball featuring a flavorful mashup of the familiar (grits, apple butter) paired with the unexpected (quail eggs, Korean bibimbap). All this as part of the second Fire, Flour & Fork festival, a multi-day, multi-event and -venue “gathering for the food curious” headlined by dozens of culinary leaders and experts from around the state and around the country.

Exactly what unites these disparate elements and defines this movement might seem difficult to pin down at first in a dizzying variety of descriptors. It is organic, local, ethically sourced, seasonal, free-range, small-batch and micro-brewed—high and low culture, prix fixe and fast-casual—offal and blood sausage, but also “veg forward” and vegan glam. It is a polyglot of Southern traditions, classical cuisine and world flavors embraced and accelerated by food television and its cast of celebrity chefs as well as the viral power of social media—tweeted from the kitchen, Instagrammed at the bar and Yelped on the Uber ride home.